The last book I bought was the kindle edition of The Second Greatest Story Ever Told by Gorman Bechard, after a recomendation by a friend. I haven’t read it yet, so here’s the blurb from GoodReads! 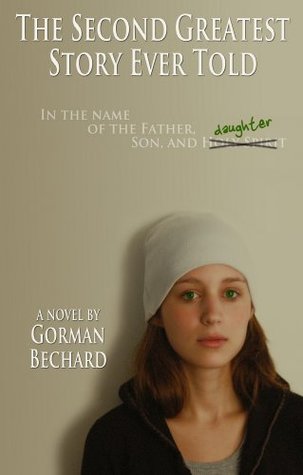 The world has problems! And no one knows that better than God. (He sees everything, remember?) He decides it’s time for that ultimate wake-up call. Only this go-round, the Big Man is giving his Daughter a shot. Her name is Ilona. She’s 18, lives in the East Village, listens to alternative music, dates, drinks, and has no problem telling the Pope and the President that they better get their act together…pronto! But like every Savior, Ilona has a deadline. She needs to get her message (the 11th commandment: “Be Kind”) across now. And what better way than through the media. She becomes a sensation, promoting her word on various talk shows, and from her vantage point on the cover of every magazine. Ilona is the new “It” girl, the messiah for the X-Generation: cool, quirky, and sexy. But as with her Brother before her, there are the doubters amongst us. People who feel that God has no right rewriting the Bible and that Ilona is the black sheep of the Holy Family. But God is not about to stand by and watch as his little girl is “crucified.” He’s had enough of the hypocrisy, and takes out a little revenge on those who refuse to believe…opening the door for Ilona to work her divine magic.

Here’s what our bookish friends had to say!

The last book I bought was The Shape of Water (Commissario Montalbano #1) by Andrea Camilleri. My dad is a bit obsessed with this series and recommended I give it a try, so I grabbed a Kindle copy from Amazon.

The last book I bought was The Andromeda Evolution by Daniel H. Wilson and Michael Crichton. I’m so excited to read this, but I’m also so nervous… Michael Crichton is my favorite author, so we’ll see how I feel about this work! I loved Dragon Teeth, which was a manuscript of Crichton’s that was found and given to another author to complete after his passing in 2008, so I have high hopes that this one is similar. I bought this book at a store called Bull Moose. I was there selling other books back, and when I saw this one, I grabbed it immediately!

The last book I bought was actually a whole passel of them… At my local library book sale! Hardbacks are $1, paperbacks are 50 cents… So I basically got all the books in this photo for LESS than $10!! I picked up the two Heroes of Olympus books because I really enjoyed that series, after reading through Percy Jackson and enjoying it WAYY more than those pathetic film adaptations… The two Richard Castle books because WHO DOESN’T LOVE A GOOD SHOW-TO-BOOK-SERIES TIE-IN?? Then there was the Agatha Christie books… And Then There Were None was actually the only book I’d previously read out of the ones I got… and here I thought I’d already read them all! I am thrilled to be back into it. She really is the Madame of the Whodunnit!

The last book that I bought was The Queen of Nothing (The Folk of the Air, #3)  by Holly Black. This book was my highly anticipating book that I have been waiting for so long I can’t wait to start to read it soon.

3 thoughts on “Winter Bookish Blog Hop – What is the Last Book You’ve Bought?”